Who doesn’t love a good film? And with the world not fully operating at its normal peak, we have nothing to do but watch film and film and more film. Whether you enjoy Netflix, YouTube, Amazon Prime, HBO, and more, film is pretty much life. Since the inception of the pandemic, the average individual spends 8 hours a day watching some type of film (movies, television shows, etc,.). It’s safe to say that the industry of entertainment may not be going anywhere anytime soon. But have you ever wondered what the life of a filmmaker actually entails? Like how did their life as a creative begin?

We see the beauty on screen. We see the amazing award shows. But we never get to see the life of the creative behind it. What prompted them to enter the life of creativity? Well here’s your inside look. I spoke with filmmaker Arnetta Randall and her love for creating magic for the film and what’s to come.

Ashley Shaunte What do you love the most about being a filmmaker?

Arnetta Randall I love crafting stories. I love bringing those stories to life. I write stories that I’ve always wanted to see or stories that I think need to be told.  Being passionate about the story that you’re telling is the key to seeing it through. Being an indie filmmaker is not the most glamorous job but it’s worth it if you’re proud of the final product.

Ashley Shaunte Did you always see yourself writing and directing and producing?

Arnetta Randall 10 years before I wrote my first script, I impulsively bought Christopher Riley’s The Hollywood Standard from Amazon. I was in school studying creative writing at the time, so I assumed my storytelling medium would be novels. After undergrad, I had grandiose dreams of being the next Toni Morrison or James Baldwin. I pictured myself going to grad school: getting the MFA, the agent and the rest being history. My foray into screenwriting happened when a cousin asked me to write for a sketch comedy show that he was working on. After that, I had a filmmaking bug and made my first short film.

Ashley Shaunte Where do you suggest a young creative begin when trying to get their foot in the door as a filmmaker?

Arnetta Randall In the words of Nike, just do it. Don’t be afraid to make a bad movie. After a while, you just get better. Study the craft. Find like-minded creatives and make something.  Sound is just as important as the visual. Enter the film festivals.

Ashley Shaunte You have a new web series, Da Office, releasing soon, can you tell us what the audience can expect from it?

Arnetta Randall One of my most memorable jobs was in a call center. You interact with so many different personalities from your co-workers to the customers you talk to. So I thought that exploring that would be hilarious. Given the current state of the world, I wanted to tell a story of Black joy. Viewers can expect a raucous good time.

Ashley Shaunte Where do you see yourself in 5 years as a writer, director, and producer?
Arnetta Randall My long-term goal is to move to Los Angeles and work in the entertainment industry. I want to grow my production company, Randall Productions. I want to produce feature films that center on multifaceted black characters. So hopefully in five years, I have a couple of feature films under my belt and a TV show.

For more information and to connect with Arnetta Randall visit https://www.randallproductions.net/ 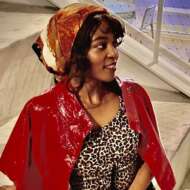